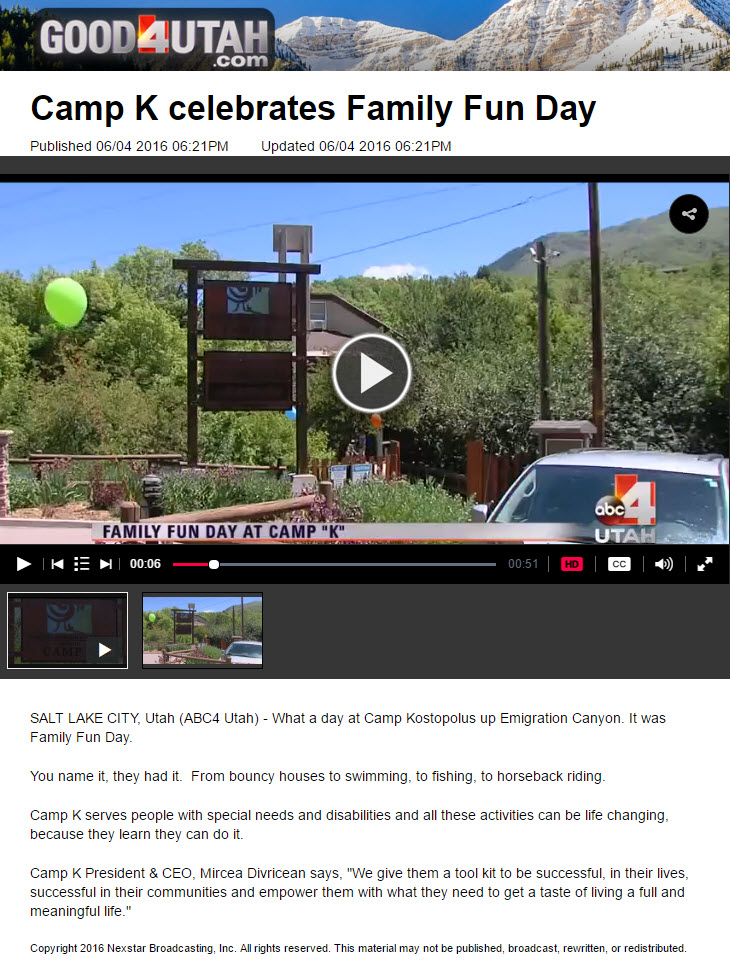 Experience the Magic of Camp K

Don Hudson interviewed Mircea Divricean and Rusty Angus on May 18, 2016.  Mircea spoke about our upcoming Family Fun Day, and Rusty spoke about his experience at Camp K. 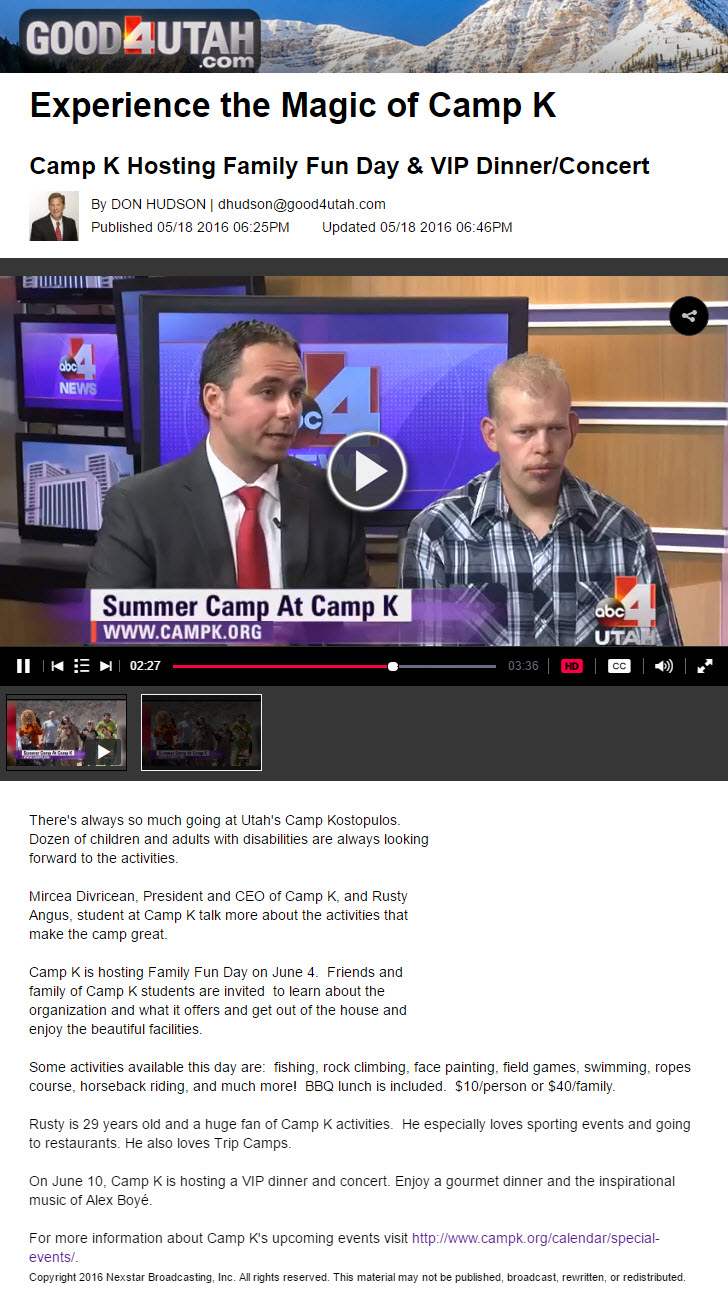 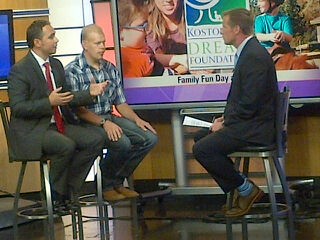 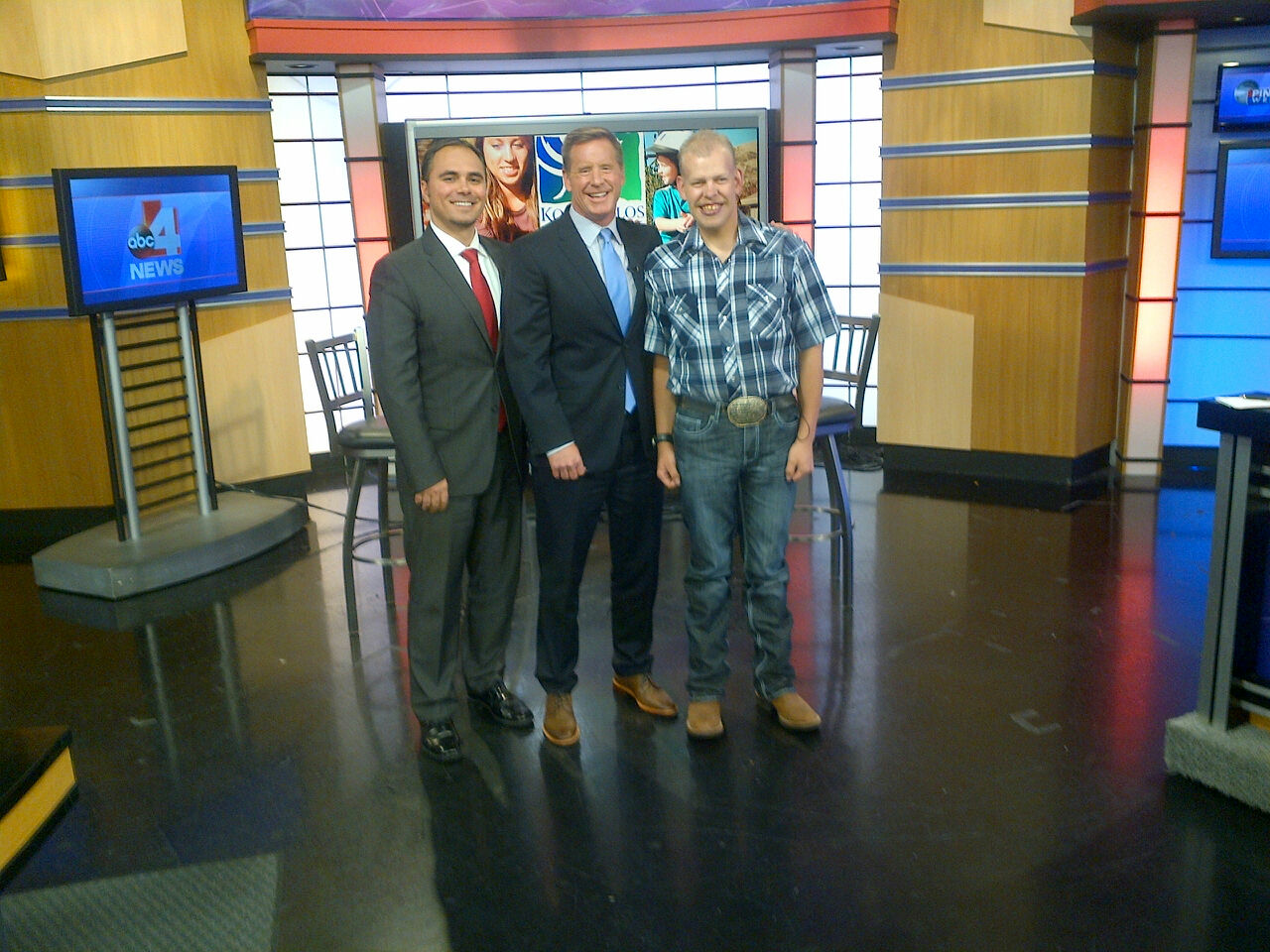 On May 6, 2016, we held our 28th Annual Send a Kid to Camp Gala.  I would like to thank everyone who helped to make this the best Gala in the history of Camp K!

I would like to start by thanking our Advisory and Executive Board; all our wonderful staff at Camp K; our Gala committee and all our volunteers; I would like to thank our Chairman of the Board Rick Lifferth for his leadership.

I would like to thank our Platinum Sponsor Wells Fargo and Dee O’Donnell the Regional President for her friendship and support of Camp K.

I would also like to thank all our Silver Sponsors and all the donors and supporters that made tonight possible! Please take a moment and see all the wonderful sponsors listed in our program tonight!

And most importantly, I would like to thank ALL of YOU that are here with us tonight. What a glorious night, You belong to Camp K tonight and we will do our best to make sure that when you walk home tonight you will have the same view and understanding as we have at Camp K – that people with special needs and disabilities are amazing people, and when it comes to Bravery, Selflessness, Understanding, Honesty, and Kindness we have so much to learn from them. At the end of the night we hope that ALL of you would like to get involved with Camp K, as I promise you, it will change your life!
Life is an amazing but challenging journey; a journey of self-discovery and continuous learning. If you want to grow as an individual surround yourself with people that are very different than you as from people that are very similar with you there is very little to learn but so much to learn from people that are different. At Camp K we believe in inclusion, we believe in diversity, we believe in creating an environment that fosters learning and self-growth. We all want to live full meaning full lives; we would all like to leave our mark on society in some way; to hopefully leave behind a legacy. I was watching a movie recently and the main character toward the end of the show was at the end of his life. He lived a very successful and full life in every way… At his last birthday party he said to his guests: “I wish that you would have a life, as lucky as mine, that you could wake up one morning and say, I don’t want anything more …”

When I first worked at Camp K as a counselor in 1998, I learned about the history of the camp and about Dan Kostopulos, the founder of this incredible program. He saw a vision and wanted to be a difference maker. In order to make a difference you must be willing to be different. And what a difference he made. He left behind a legacy. The mission and values that Dan built into the foundation of Camp K 50 years ago are still very alive today, they are set to prove that there are no boundaries to one’s potential or abilities, and that nobody should be excluded or left behind. I find myself now at the helm of Camp K, 50 years later, walking in the same footsteps of Dan Kostopulos.

Camp K started with a dream, Dan’s Dream. I am humbled by the opportunity to continue Dan’s dream – a dream for a better world, a more accepting, inclusive world, without barriers, where everyone is given a chance. At Camp K lives are being transformed, dreams are being realized and we are impacting dreams all over the world.

The key to success is self-confidence and self-esteem, Camp K works very hard to help everyone that attends our programs to build self-confidence. Every successful person on this planet had someone at some point believe in them, be it a parent, a coach, a boss… We believe that our students CAN, rather than CAN’T. We believe in them and as they learn from us we learn from them.

Christopher Reeve, whose foundation is a supporter of our programs, once said, “A hero is an ordinary individual who finds the strength to persevere and endure in spite of overwhelming obstacles.” As the President and CEO of Camp K, I am very fortunate to meet heroes every day at the camp. Our participants come to Camp K to stretch their imaginations, learn practical life skills, and maximize their potential for independence. When you see campers with spina bifida conquering a 60-foot high ropes course, people with Down syndrome performing drama plays, people with Prader-Willi syndrome riding horses…you know that you have heroes around you.

I will share with you one story of success here at Camp K … Vanessa is Nicole’s mother. They live in the United Kingdom, two hours outside of London. She wrote this the other day to a Delta Airlines Director: “My daughter, Nicole, has a life limiting condition, Neurofibromatosis and has had a pretty hard life, full of hospital appointments surgery and loneliness.

When she was 14 she found out about Camp K, and off she went – to say it changed her life is an understatement, not only did it give her confidence, she made the first real friends she had ever had.

She has been lucky enough to go 4 times and the change over the years has been huge. She has won many awards for her courage and determination – skills gained at camp, and is now determined to get to University and live her life the best she can. All of this is down to her Camp K and the staff there. Camp K is the highlight of her year and gives her something to focus on when things become difficult for her.

I am well aware that Nicole has been lucky enough to go to the camps and that not everyone gets the same opportunity, especially as many of the parents of these children have the same condition and have social, learning and physical difficulties themselves and could never think of sending their children to a camp in the UK let alone the USA. This is why I decided to set up a charity in the UK for children with Neurofibromatosis so that more young people had a chance of going to camp and having the same chances as Nicole.”

I am very happy to say that she was able to raise funds for the flights through the charity to send 10 children this year to Camp K from UK.
We also serve students from Canada and Germany and Japan, however the cost of travel it is very expensive, and for that reason, we would love to bring Camp K to the world, to help crush boundaries and show the world how amazing these children really are, and how people with different abilities can raise above their daily challenges and achieve tremendous things and be inspirational to all of us.

Rick Lifferth, Chairman of the Board, speaks about his association with Camp K, and the mission of Camp K.

Continuing our tradition, Camp K celebrated the contributions made on behalf of children in our communities by honoring the Ray and Tye Noorda Foundation, with our 7th Children’s Humanitarian Award. This award was accepted by Andy Noorda, who spoke about his experiences, and the reason their foundation supports Camp K.

Andy said, “It’s a very magical moment when someone realizes, for the first time, that they can do something.  Camp K provides a lot of those moments.  Those magical moments are why the Ray and Tye Noorda Foundation supports Camp K.”

We started a new tradition in 2016 – recognizing those who have made a tremendous impact at Camp K through service. This year, we honored ABC 4 Utah, for the amazing support they have given Camp K – being the voice for our amazing students, and showcasing our programs to the world. Don Hudson accepted this award, and speaks of the impact that Camp K has.

Celina Jensen served as Camp K’s 2015-2016 Ambassador.  Celina is an amazing person, and she shares her experience about her time at Camp K.

Greg Kogan is Camp K’s 2016-2017 Ambassador.  He spoke at the 2016 Send a Kid to Camp Gala – and entertained the crowd with his charm, wit, and his amazing musical abilities. We were lucky enough to have a piano available so that we could hear him play.

Dee O’Donnell is the Regional President of Wells Fargo. Wells Fargo has generously supported Camp K throughout the years, and was the Platinum Sponsor for our 2016 Send a Kid to Camp Gala. Dee shares her thoughts about Camp K.

Salt Lake County Sheriff, Jim Winder, serves on the Advisory Board of Camp K. At our 2016 Send a Kid to Camp Gala, Jim shares his thoughts about Camp K.

Don Hudson, Anchor at ABC 4 Utah, was the Master of Ceremonies at our 2016 Send a Kid to Camp Gala. He shares his thoughts about the programs at Camp K.

Don Hudson acknowledges the amazing, talented, people who have helped us bring the message of Camp K to the world.

On April 26, 2016, employees from Larry H. Miller Companies donated their time to help Camp K.  Don Hudson of ABC 4 Utah joined them at Camp K, and tells their story.

Brian Carlson interviewed Mircea Divricean and Greg Kogan on Good Morning Utah.  Mircea spoke about our upcoming Gala, and Greg spoke about his experience at Camp K.  Greg is Camp K’s 2016 Ambassador, and will be speaking at the Gala on May 6, 2016. 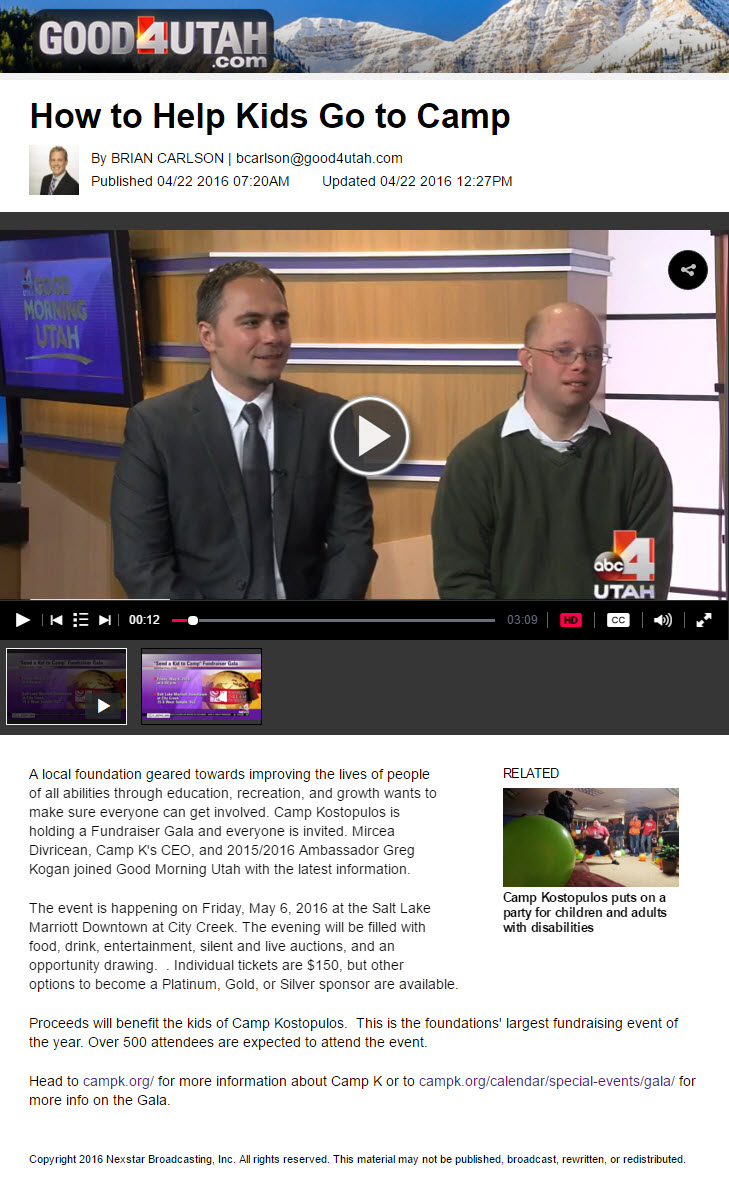 How You Can Help Send a Kid to Camp 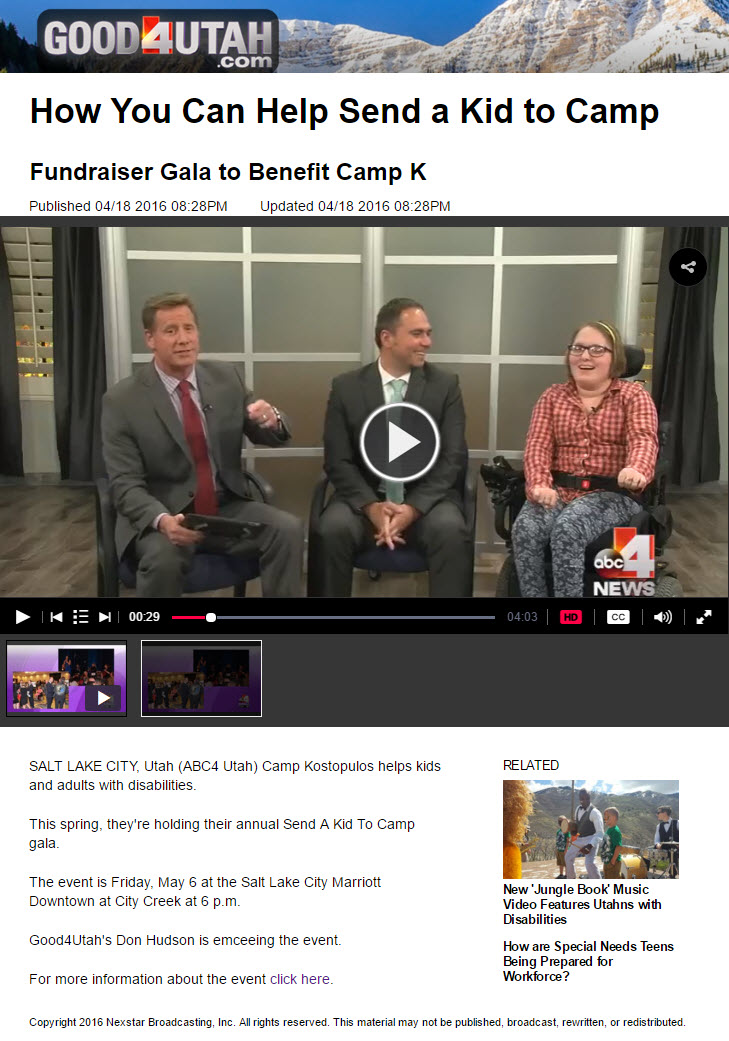